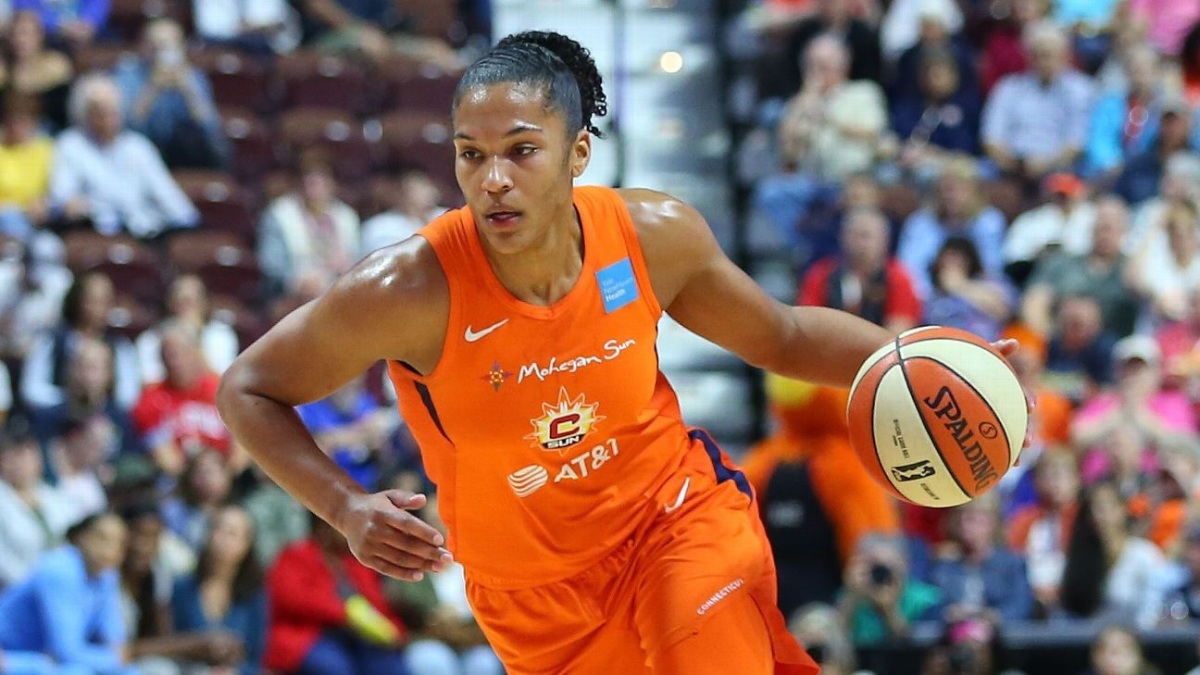 At first glance, the Connecticut Sun look like a team with two players, Alyssa Thomas and DeWanna Bonner, playing well, and the rest of the team letting them down. Bonner in particular has been playing well this year, averaging 28 points, 9 rebounds, 4 assists, 2 steals and shooting a career high from 3. Alyssa Thomas is averaging 11 rebounds, 4 assists, and 2.5 steals per game.

The other players for the Sun have not been playing well. Jasmine Thomas has been inexplicably unwilling to shoot when teams go far under every pick. Kaleena Mosqueda-Lewis will shoot better than 19% from 3. The team is missing Briann January, a career 38% 3 point shooter. She will hopefully be back soon.

However, part of the Sun’s struggle on offense can be laid at the feet of the awkward fit of Alyssa Thomas and DeWanna Bonner. Each player individually is a great player who would be an asset to many teams, but they overlap too much on the court, with their specific weaknesses magnified when they share the court together, and their strengths minimized. This is especially true for Alyssa Thomas, who has struggled this year with her efficiency on offense.

Both Bonner and AT are at their best with the ball in their hand, and neither have been effective shooters from distance throughout their careers. So far this year Bonner is shooting a career high 37% from 3, and it still has not been enough. Should she regress to her career 3 pt average of 30%, the Sun are going to struggle even more. Alyssa Thomas has not attempted a three since 2014.

Modern basketball makes it very difficult for teams to be successful with more than 1 non-shooter on the court. The Mystics and Storm have managed to play significant minutes with 5 shooters, and the results show, but last year’s Sun are an example of how a team with 1 non-shooter  can still be very effective.

Alyssa Thomas was able to excel last year because she was the only player who was not a threat from 3. This allowed the Sun to involve her in ball screens, or play through her in the midpost, and station four shooters around her. Look at the spacing in this game against the Sparks in last year’s semifinals, compared to the following picture, a play involving Bonner being screened for by Brionna Jones from this year against the Sparks.

The poor fit has only been magnified by Jonquel Jones’ decision to opt out, as she is a 6’6′ center who has shot 38% from 3 for her career. Even in a down shooting year at 31% from 3 in 2019, Jones still demands at least some attention at the three point line, compared to Brionna Jones who has yet to take a 3 in her WNBA career. This can be seen above as Nneka Ogwumike has to at least stay somewhat attached to Jones on the wing.

The next picture shows a play from the 2nd time the Sun played the Lynx this year, that ended in a turnover with an errant Bonner pass to AT. Even if the pass had connected, the Sun would have been left with AT attacking 3 Lynx players. I marked where Jonquel Jones would likely have been standing on this play, either drawing Fowles out or forcing the Lynx to rotate to Jones when she got the pass. I tend to put Jonquel Jones higher in comparison to other elite centers in the W than other commentators, and this is one main reason why.

Curt Miller knows the fit is an issue, which is why so many plays for the Sun begin with Bonner running a pick and roll with Alyssa Thomas screening. AT is an effective screener in the pick and roll, as she can roll hard to the basket and make the next pass or finish depending on how the other team defends it. The next pass out of a short roll is hard for many bigs, but AT is as good at it as they come, when provided proper spacing.

However, this is not nearly as effective when the Sun are playing only one player, Jasmine Thomas, who teams feel the need to guard from 3. And even Jasmine Thomas is merely an ok 3 point shooter, at 32% for her career. Look at where the Sparks players are standing on this play from their game this season in the next picture. Bonner has just slipped the pass to AT out of a pick and roll, but now AT is staring down 2 defenders in the paint, with 2 others in or near the paint. Yes, AT has missed some makeable shots recently, but this kind of play where she is trying to score over 2 defenders has also contributed to her shooting 2 for 17 in her last 2 games.

The Sun will not be one of the 2 worst teams in the league this season, as the standing indicates now. They have played a difficult schedule with their 4 losses coming against 3 of the top 5 teams in my preseason predictions. Their defense has been good, keeping them in these games even with the offense scuffling, and against weaker opponents their defense should lead to transition opportunities and easier scoring. Both Bonner and AT can grab and go off of rebounds and turnovers, making this team dangerous in transition.

However, the start has shown why even before Jonquel Jones opting out I thought the Sun were not as good as last year’s team. With Briann January and Jonquel Jones they likely would not be 0-4, but a finals run still seemed unlikely given the loss of shooting and playmaking from their 2019 team. Shekinna Stricklen is not as good as Bonner in nearly every area of basketball, except for shooting. Shooting just happens to be the most important skill to put next to Alyssa Thomas. Moving on from Stricklen and signing Bonner is understandable, but Stricklen’s shooting is hard to replace, as the Sun are finding.

More inexplicably, the Sun let Courtney Williams walk. While she does have a frustrating shot profile, as Stephen Trinkwald of the Double Down podcast pointed out, a trend that has continued this year, she is still really good.

She would be an upgrade at guard over who the Sun have, and at 26, is still entering her prime, which is why I was down on the decision to not pay her, as compared to a 33 year old Briann January and even a 32 year old DeWanna Bonner.

Curt Miller has few options to try to turn things around for the Sun. One option to explore is more Jackie Gemelos in place of Bria Holmes. Holmes is not as good a defender as her size and athleticism would seem to indicate, given a tendency to make curious decisions as a help defender, such as helping off of the strong side shooter and giving up open corner 3s. Gemelos has shown she can shoot and might help space the floor, instead of Holmes, who teams ignore.

Another alternative is to let Jasmine Thomas and other guards run more pick and rolls with Alyssa Thomas. This might work, especially if Bonner stops hanging out under the basket while the Sun run a pick and roll. Her willingness to fire from 3, especially this year when they are actually going in, is not helpful when she is under the basket. As shown here, Bonner hung out just outside the paint throughout the Lynx game, whenever she was not involved in the play directly. AT can score on Erica McCall after receiving the pass out of the pick and roll from Natisha Hideman, but it is much tougher with Mikiah Herbert Harrigan waiting next to Bonner under the basket.

This season was never going to be one the Sun were competing for a championship once their best player, Jonquel Jones, opted out. Now the task falls to Curt Miller and co. to figure out how to maximize their talented but flawed stars in Alyssa Thomas and DeWanna Bonner, while not running them into the ground. The goal should be maximizing this team in 2021.

Next year’s team will be better with Jonquel Jones returned, but Bonner will be 33 (turning 34 during the season). The Sun have to hope one of their younger guards steps up and Bonner’s play does not slip, as Jones is entering her prime and now is the time to capitalize on such a force. If not, it will be interesting to see if Jones wants to stay with the team, or see whether she can find another home.