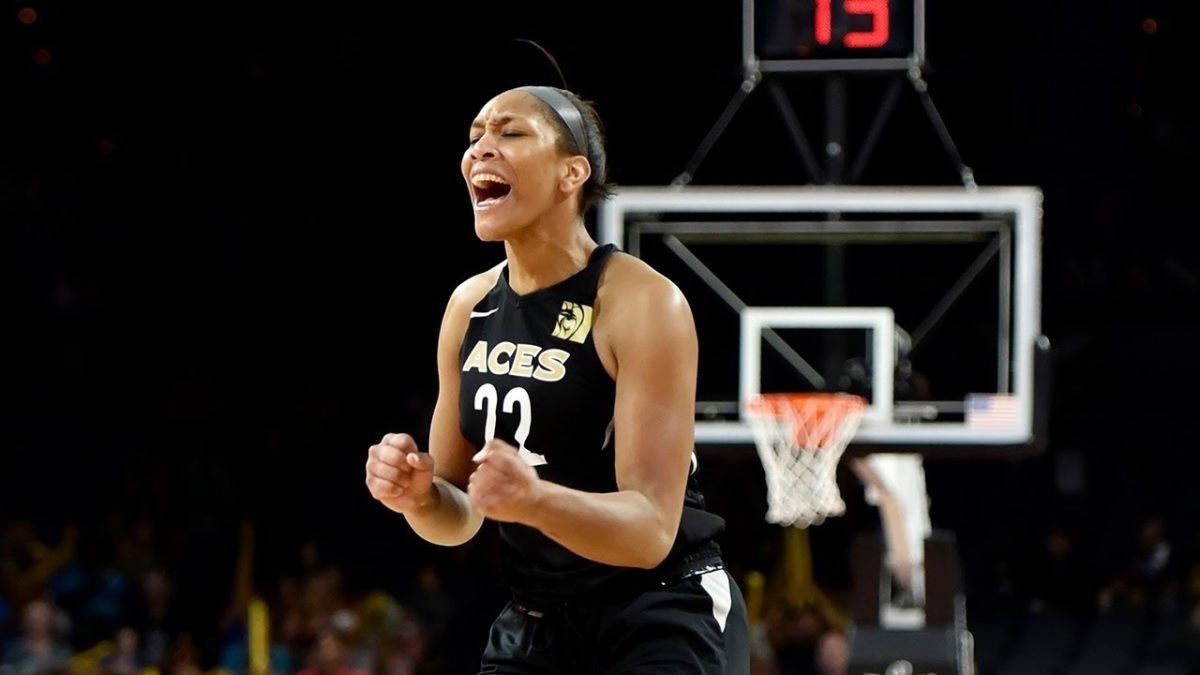 The Las Vegas Aces are one game away from being sent home as the first number 1 seed to lose in the WNBA semifinals since the league implemented the current playoff design in 2016. The Aces are lucky to even be in this series at all, since they did not win game 2 by much even after the Connecticut Sun’s best player, Alyssa Thomas, went down with an injury.

Not coincidentally, the only team that fell even further was the Los Angeles Sparks, the Sun’s second round playoff opponent. The Sun were a good defensive team in the regular season, but not dominant like this. Being able to shorten the rotation and lock onto a specific opponent, with a mostly veteran rotation, has worked wonders for the Sun. The Aces’ struggles appear to be because of the Sun defending the Aces well, not the Aces missing shots they normally hit or making unforced errors.

Part of the reason the Sun can defend the Aces is because of the Aces on limitations on offense. Offensive success in the playoffs comes down to the ability to play multiple styles. The Aces so far are running into the issue that they are used to having the physical advantage at multiple positions over opponents and they use that to score close to the basket and earn free throws.

This size advantage does not exist against the Sun. The Sun are able to match the Aces at every position, and have been able to help off of the Aces shaky outside shooters, to shrink the advantages even more. Alyssa Thomas is one of the few players in the WNBA with the strength and lateral quickness to hold up one on one with A’ja Wilson. DeWanna Bonner can guard Angel McCoughtry or even Dearica Hamby if the Aces go big.

This even extends to the Aces bench. Jackie Young has been much better in her second year at using her size to bully smaller guards. But in this series the Sun are only playing one guard who is at a notable size deficiency, Natisha Hideman, and she is only playing 4 minutes per game in non-garbage time to spell Jasmine Thomas. Speaking of Jasmine Thomas, outside of Chelsea Gray, Thomas is the strongest point guard in the league, and her ability to hold up, even on switches, has been key for the Sun.

This is where the Aces really miss Kelsey Plum, someone who can shoot pull up 3s off the dribble and introduce more stylistic diversity into the Aces offense. But given that she is out, it is up to Bill Laimbeer and the Aces players to figure out some other approaches to get their offense unstuck.

The first adjustment to consider would be for Laimbeer to actually play his best players. (edit to add: Hamby was in fact injured, and will miss game 4. Aces lose their third best player) Dearica Hamby may be dealing with an injury, per a Holly Rowe report during game 3 but if she is not, it is baffling that she is playing less than 30 minutes per game. Maybe Hamby can not play 37 minutes like Wilson, Bonner, and both Thomas’ have in this series, but Laimbeer should be considering how many she can and hitting that number.

Carolyn Swords should not be starting. As the third big she is a fine choice, especially as she hasn’t been killing the Aces, but Hamby is better. Even struggling in this series, Hamby raises the Aces ceiling. So long as the Aces stop trying to play through Hamby when she is being guarded by Alyssa Thomas, she needs to be playing as many minutes as she feels she can handle.

If the Sun continue to keep Brionna Jones on Wilson when she is in with Hamby, it should also allow Wilson to have an easier match up to attack on offense from the start of the game. Though the Sun should consider flipping that matchup, and having Jones guard Hamby and keeping Alyssa Thomas on Wilson.

The other change should be how to leverage McBride’s shooting to make life easier for Wilson. Wilson can score on Thomas, but letting the Sun single cover her is part of why Wilson has been the only Ace showing up consistently in this series. For instance, using McBride as the entrance passer to a Wilson double team will make it trickier for the Sun to bring a double, since McBride will be one pass away, rather than a much poorer outside shooter like Danielle Robinson or Jackie Young. Swapping McBride and Robinson on this play, for instance. This pass lead to an Aces turnover, whereas McBride could have stayed at the 3 point line, and not cut into a covered paint like Robinson did.

The Sun have been good at bringing help from different areas including from across the court, but making the passes simpler for Wilson will ideally help. She was able to score some over double and even triple teams, but passing, along with 3 point shooting, is the main part of her game she still struggles with compared to her peers like Candace Parker and Breanna Stewart.

Wilson had a few bad turnovers in game 3, and while long term she will improve her passing, as players who came into the league accomplished scorers have, like Elena Delle Donne, making the reads easier in this game will help.

The other way the Aces could involve both Wilson and McBride is to run some inverted screens, with Wilson handling the ball and McBride screening for her. Similar to how the Nuggets will use Nikola Jokic and Jamal Murray. Because while Wilson may not be the passer her peers are, she can punish mismatches better. Even a guard as big and strong as Jasmine Thomas is going to struggle to deal with Wilson.

The Aces tried this once in Game 3, but only for an out of bounds play. They also ran it so close to the basket that the Sun had time to send help. Wilson still hit the shot over 3 defenders, because she is that good, but doing something similar further out on the floor would give Wilson more space to attack. Briann January switches onto Wilson, forcing immediate help from other Sun players.

The traditional pick and roll has been tough sledding for the Aces, as the Sun guards are too good at avoiding being screened, especially since they can go under screens with any of the Aces guards who are not McBride. This play from Briann January is a great example of this, as Wilson tries to screen her but January sticks with Jackie Young, and the Aces do not gain any advantage.

Even as good as Alyssa Thomas is, she is not as adept at avoiding screens, and Wilson is a good enough shooter to hit open long 2s. While in time she should add the 3, she can still do damage if you leave her open inside the arc. Brionna Jones has good hands and uses them to get steals and has competed hard on defense, but is at a speed disadvantage and the Aces should be looking to put her in space.

It also will hopefully unlock McBride, who has been taking far too few 3s in this series. She is the Aces only plus shooter this season, and yet she has been taking far too many shots with feet on the line or just inside the 3 point arc. Screening for Wilson and then popping out for a 3 will hopefully help get her going. She is averaging three 3 pointers per game, after averaging over 4 in 2019 and nearly 6 in prior seasons.

The Aces have the talent to come back from down 2-1 in this series and win the next 2 games. But all year the concern was that the Aces lack of shooting and offensive variety would catch up with them. While the regular season the Aces were able to earn the number 1 seed, so far the playoffs are showing why shooting threes is important.