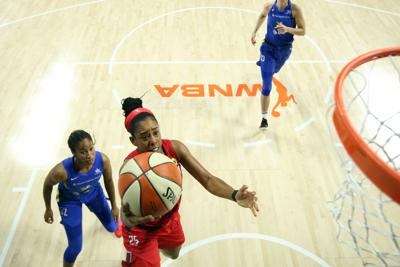 The Atlanta Dream have had as tough a 2020 season as any team not named the Washington Mystics when it comes to opt outs, injuries, and players coming back after testing positive for covid-19. Tiffany Hayes and Renee Montgomery opted out, Glory Johnson, Courtney Williams, and Kalani Brown all joined the team late and have needed time to get back into shape and in tune with their teammates, and Chennedy Carter has missed time with an ankle injury.

This has left Nicki Collen having to play some lineups she probably was not planning on playing coming into the year. Notably, Monique Billings at the power forward spot. Billings does bring some positives to the Dream. She is a good offensive rebounder, she is able to outrun opposing bigs in transition, and can sometimes beat opposing bigs off the dribble using her speed.

However, Monique Billings’ lack of any kind of shooting also highlights some of the ways the WNBA is changing to emphasize shooting. Simply put, it is very hard to craft a top 6, so top half of the WNBA, league offense while playing two front court players who can not shoot 3s. Billings spends much of the game playing next to the Dream’s center, Elizabeth Williams, who also does not shoot 3s.

The obvious counter to the need for spacing is the Las Vegas Aces. A team that shoots far fewer threes than any other team, but as of 8/31 is 2nd in offensive rating, per wnba.com. However, the Aces actually manage to have better spacing than one might think, by where they station their players.

In the Aces best lineups, Dearica Hamby plays the 4 on offense. While Hamby is only attempting 1.5 3s per game this year, she will stand behind the 3 point line and teams will at least somewhat guard her. This allows the Aces to give just enough spacing to A’ja Wilson and whoever else to attack inside. McCoughtry will similarly stand at the three, and take them sometimes. Both are also excellent cutters and better post up threats than Billings, which helps.

Something to watch for in the playoffs is how teams guard the Jackie Young, Angel McCoughtry, Dearica Hamby trio, as teams will often be more extreme in ignoring non-threatening shooters in the playoffs when they have time to focus on a single opponent. The benefit the Aces have is all 3 of those players can attack and make plays off the dribble, which makes up for some of those spacing issues.

Back to the Dream. Even when Monique Billings puts up decent numbers herself, when she is playing next to Elizabeth Williams, she tends to make it harder for her teammates to succeed. A big question the Dream should answer going forward is who is going to be their power forward of the future.

Of course playing Billings next to a stretch 5 who can shoot 3s might work, but there are 2 of those currently in the WNBA, Stefanie Dolson and Jonquel Jones. I guess 3 if you include Natasha Howard, who occasionally hits her 3s. While that would be great, figuring out a better solution for who plays 4 seems more likely..

This play against the Minnesota Lynx is a good example of the drawbacks of two non-shooters in the front court. On the box score, this play is recorded as a turnover by Betnijah Laney. However, the play breaks down largely because of how Napheesa Collier is able to completely ignore Monique Billings. Watch where Collier goes and where Billings goes.

The play is a pick and roll with Elizabeth Williams screening for Betnijah Laney. Right off the bat, Damiris Dantas, who is guarding Williams, knows she can double team Laney hard, because Collier is right behind her to pick up the rolling Williams.

Then, when Laney stops to look for someone to pass to out of the double team, all she sees is Billings running right at her. That might be the best pass, but it’s understandable why Laney tries for something riskier. Billings isn’t likely to make a shot from long 2, and if she tries to drive, Dantas and Collier are there to cover her, since Elizabeth Williams is still under the basket.

This is why willingness to shoot 3s can matter, even when the outcome is not particularly good. If Glory Johnson had been with the Dream from the beginning, she might have gotten the starting nod at the 4. And while Johnson is by no means a knock down 3 point shooter, a career 31% 3 point shooter, she is at least willing to stand behind the three point line and let it fly when open.

Especially in the regular season, opposing teams tend to guard players who let it fly, even when the percentages say they could back off. DeWanna Bonner has benefited from this tendency for years. Letting Bonner shoot a 3 is about as good an outcome as one could hope against the Sun, but teams still guard her out on the perimeter, even though she is below 30% from 3 for her career.

Monique Billings has flirted with shooting 3s a couple of times this season. One avenue to improvement would be for her to add that to her game. But the Dream should be making plans as if Billings is best off as a smaller 5 off the bench, who can use her quickness to outrun opposing bigs. Can Betnijah Laney give them minutes at the 4? All questions to keep an eye out for over the final 7 games of the 2020 season and into the offseason.

The Dream have found some good pieces this year, even in a frustrating season in terms of wins and losses. Betnijah Laney is most likely going to win Most Improved Player of the year and Chennedy Carter has looked at times like a future superstar. Courtney Williams is rounding into shape and looks like the player the Dream signed. Shekinna Stricklen is still an excellent role player. Reinforcements from Tiffany Hayes and Renee Montgomery will hopefully be coming. How this team handles the forward position is going to be key to the next few years for the Atlanta Dream.

One thought on “Looking Forward: The Atlanta Dream’s Forwards”