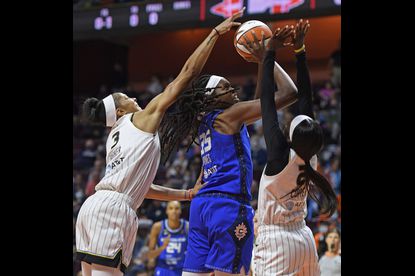 A tied series entering game 3 is often the best game in a best of 5 series. Game 5s are great, but winning game 3 is such an advantage for the winning team. This is the first game that both teams have a real chance to adjust as well and pick at what they do well and other team struggles to do.

Going into game 3, the Sky are the team who will have to show they can beat the Sun. The Sky won game 1 in a double OT game, which can be chalked up to luck as either team could have won that game. Game 2 on the other hand was a more convincing win by the #1 seed Sun as they ran away with the game in the fourth quarter to win by 11. And it was a 15 point lead when garbage time began.

Before getting into the adjustments the Sky can control, the main adjustment for the Sky to make will be to get some better shooting luck. In a make or miss sport like basketball, shooting luck decides quite a bit. In game 1 the Sky shot 36% from 3, a tick above their regular season mark of 34%. In Game 2, however, the Sky fell to 27% from 3. Allie Quigley went 1 for 5 and Courtney Vandersloot missed both her 3 point attempts. Pair this with the Sun hitting an unsustainable number of long 2s and the Sky faced an uphill battle.  Should either of those, and possibly both, of those factors normalize, the Sky should be in better shape. But here are two other ideas.

The Sky should consider relying less on their bench and tightening the rotation. James Wade has already begun the process, as Ruthy Hebard has only seen the court in garbage time. Next step will be to decide if Astou Ndour is really offering enough to play her over extending Stefanie Dolson and Azurá Stevens. While Ndour had good moments in game 1, I would like to see Wade rely on his best players over the course of the season instead of trying to guess which non-Candace Parker big has it going in the moment.

Dana Evans may have reached the limits of her ability to contribute. I am still bullish on her future as a W player, but playing a rookie pg against Jasmine Thomas and Briann January in the playoffs is asking a lot. Wade should consider if he can stagger his minutes to play Lexie Brown with Candace Parker and have Parker initiate the offense. Lexie Brown is not a point guard but she can shoot off ball, at least in theory, though the results have not been there this season in a small number of attempts. She is definitely a much better defender than Evans.

Curt Miller has no trouble cutting his rotation as much as he can which Wade will need to match. Alyssa Thomas may not be able to play a full 40 minutes, and because of the rise of Brionna Jones she would not have to even if she could, but it is unlikely we see more than token minutes for Sun bench players except for Natisha Hiedeman and AT.

It is possible that the Sky can execute their coverage better that they have used most of the season, rather than changing it entirely. Just because something is not working does not mean a coach needs to change it. Better execution is possible. But in this case, I don’t think the coverage makes sense given the Sun’s strengths and weaknesses on offense.

The Sky were doing two things when defending the Sun in pick and roll defense worth reconsidering. They were fighting over the top of picks and bringing the big up to the ball handler and doubling the ball. Neither makes much sense to me given who the Sun have as ball handlers.

Fighting over picks when the other team has good 3 point shooters, particularly off the dribble, is necessary. The Aces are not going to start going under on Diana Taurasi pick and rolls, as they and anyone who has ever watched the Mercury know how poorly that can go. Even with going over on picks and sending the big to help, DT can still drop 37 on 13 shots. The Sun, on the other hand, do not have that kind of dangerous 3 point shooting, particularly off the bounce.

DeWanna Bonner is unafraid to let it fly off the dribble, but she has shot below 30% from 3 for her career and worse on off the dribble 3s. Jasmine Thomas is a fine shooter with her feet set, but off the dribble she is not going to hurt you. Briann January is the best 3 point shooter of the bunch at 38% for her career, but on low volume. If the Sky go under on her January might hit a couple of 3s, but that is a trade off worth making to keep the Sun guards in front of the Sky defenders.

The other aspect is how the Sky can keep out of rotations against the Sun bigs. Alyssa Thomas in particular is at her best in the half court when she has a 4 on 3 advantage and can attack in space. This play is a good example. Candace actually stays further back than the Sky did for most of the game, but still ends up doubling January and eventually gives up a layup to Jonquel Jones.

The Sky should consider at least mixing in some drop defense in the pick and roll. Here is an example of the kind of drop defense I mean. Even against Allie Quigley, the Aces have Kiah Stokes stay in the paint. Enjoy the quick yellow line showing just how far off Stokes is.

To be fair to James Wade, there are reasons he does not use drop defense like this. The Sky have bigs who can defend, but none are exactly the traditional rim protector who blocks shots like a Kiah Stokes. Parker is good at using verticality and her size at the rim, but it is possible she prefers this more active style of defense as well.

Drop defense like this is also not ideal against the best guards. It can give a dangerous attacking point guard a runway to beat even good rim protectors like Stokes at the basket. Skylar Diggins-Smith is particularly adept at this. The other is even with the defender fighting over the screen, it can allow for far too much space for good shooters. The Aces do not play this way against Diana Taurasi, needless to say.

However, the Sun do not really have a guard who is particularly adept at either attacking size at the rim or shooting 3s off the dribble. Certainly not to the degree they do bigs who thrive playing against rotations. Keeping the Sky bigs nearer to the paint and doing their best to defend pick and rolls with only 2 defenders will help. The Sky will have to watch for Jonquel Jones popping out to the three point line but that is not a concern with any of the other Sun bigs.

At best the Sky should probably mix up their pick and roll defenses. The Sun found a comfort against the Sky’s defense that paired with the Sun’s defense is going to be hard for the Sky to overcome. Sky have work to do. This is when series are at their best in basketball. Adjustments come and the stakes only go up.